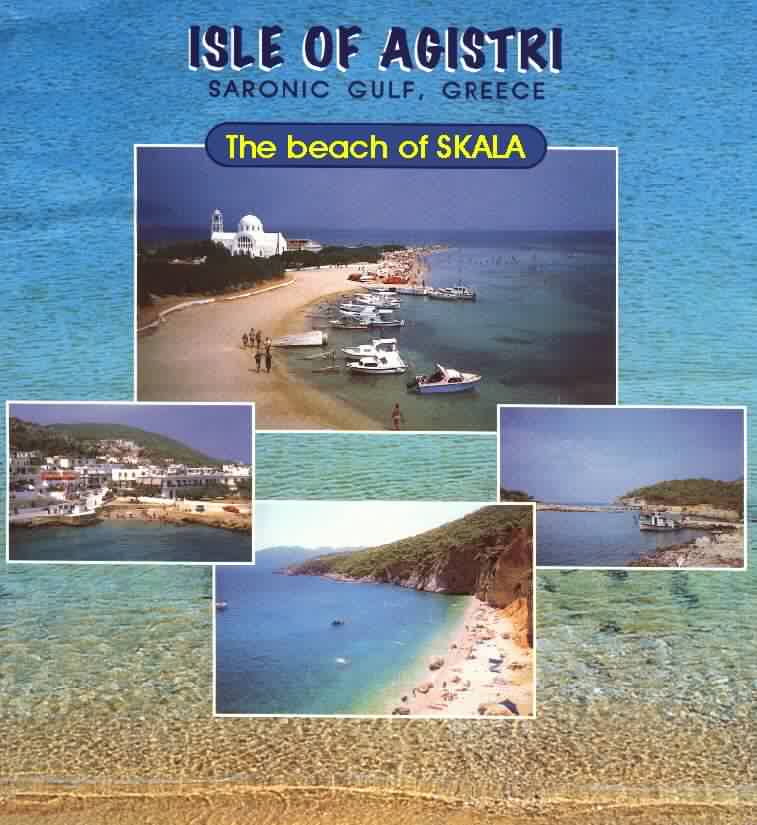 just One of the Best Appartments & Restaurant of the Island !!!

If you like a Tour around the Island in a small boat, go with Robert, an Englishman and take a four hour trip including lunch and if you are lucky a swim amoung the Dolfins !

gistri is a tiny pine covered island opposite Aegina (Egg-in-a) which as only recently opened its doors to tourism.
As a result it holds onto its original charm, despite being so close to Athens and the popular islands of the Saronic Gulf.
There are only three settlements as such on the island.
Most holidaymakers stay either at the little port of Skala (Skar-La) with its gently shelving crescent sandy beach, or twenty-five minutes walk away along the islands main road at Milos another quiet village with a man-made beach.
Both Villages have a selection of simple tavernas bars and shops but they are no means lively resorts.
The island is approximately 2 hours by ferry from Piraeus Port (Athens).

Well, that is what the Tourist brochures say about Agistri and it's all true. What they don't say is that there are no banks on the island, one taxi, one horse and carriage, one bus, which runs the full length of the island and back but seemingly with no timetable. In Skala there are three "supermarkets" each as big as your local corner shop, but eating out can be cheap.
You can walk from one end of the island to the other in approximately 2 hours but if it's hot take plenty of supplies with you as there are no tavernas on the way and only one at Limenaris. The walk is well worth the effort as some of the views are great.
If you get bored with the island you can take the local boat to Egina cost 300drms single; the port there is well worth a visit, the Egina Marina on the other side of the island is not. You can also take ferries to many of the other islands from Egina Port.
A correspondent from 1999 thought most of the tavernas on the island were of a good standard - in particular recomended "Toxotis" in Skala which they thought was excellent value, with a very good standard of food and a most amenable host-Spiros who looked after them very well .

The beach at Skala is made up of sand and shale but is quite pleasant. All of the other beaches are rock and pebbles.
There is only one naturist beach (Halikiada Beach) about 20mins walk from Scala through what appears to be people's back yards and along a footpath which winds its way along the coast to a headland from which you can see the beach but to get to it one has to either climb down a very steep incline that is not for the intrepid, the other way is to 'Walk' round the headland - quite a frightening prospect in itself. The access to the beach is not so difficult, even if you have to use your hands for two steps.
A report from 1998 says that the walk to the beach takes about 20-25 minutes to reach from Skala, you can top up with drinks at "Alkyoni" which you will pass on the way .The last part of the walk is very scenic and overlooks the sea and is through an area of pine trees , the climb down to the beach  is fairly daunting however, although we've been assured that is looks far harder than it is . It is possible to cheat by taking another path which drops down to the left of the beach, this gets you down to sea level in a far less dramatic style and enables you to do some fairly simple rock hopping round the corner to the beach. Make sure that you take plenty of water as you are quite isolated on this part of the island and also when swimming take care that you wear sandals when getting into the water as there are areas where sea urchins can be found on either end of the beach . Although we didn't try snorkeling, others did as there are loads of beautiful fish in the water at this beach.
The water is a bit colder here than the beach at Skala as the beach shelves more steeply.
There also seems to be a set of large waves every 10-15 minutes which surprise some people - we didn't see what caused them, it wasn't the ferry boats anyway.

The ancient name of the island is Kekrifalea which means head-dress. Under that name HOMER first refers to Agistri as Aegina's ally in the Trojan Wars and so do later historians. To date, digging has revealed various interesting finds which show that the island was inhabited 25000 years ago. You will note that throughout this short article I have spelt the names of the towns and islands differently this appears to be the Greeks do it, for example *I*INA, AEGINA, EGINA and ÂGINE are the same place, so as the saying says "When in Rome".